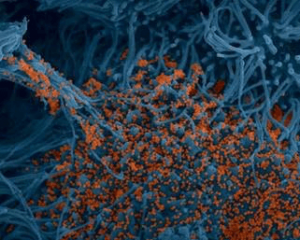 IgA antibodies play an essential role in protecting the body’s mucous membranes, particularly the respiratory tract. It was therefore logical to study this particular antibody response in patients infected with SARS-CoV-2. Researchers and clinicians affiliated with the CIMI Research Centre (Sorbonne University and Inserm) in collaboration with several clinical services of the APHP-Sorbonne University and teams from the Pasteur Institute, show that the IgA response plays a primordial role in neutralising the SARS-CoV-2 virus early and particularly effectively.

Somewhat surprisingly, IgA antibodies are often the first detectable virus-specific antibodies. This is an unusual profile, as immunological dogma dictates that the IgM response is dominant upon encountering an unknown pathogen. The virus-induced stimulation induces a very large expansion of young IgA antibody-secreting cells (plasmablasts) that circulate between the blood and the mucous membranes in which they are able to reside. However, this IgA antibody response is slowly declining, including in the saliva.

The teams in charge of this work show that in the first few weeks after infection, IgA antibodies do most of the work of neutralising the virus. The level of these antibodies rapidly decreases in the blood and becomes weakly detectable in most subjects 30 days after the onset of symptoms. However, these antibodies remain detectable and active in saliva for a longer period of time (up to 73 days after the onset of symptoms) although this level of local protection also appears to decline slowly. In a subgroup of patients with a mild ambulatory form, it is reported that approximately 6 months after counting, the saliva no longer exerts a neutralising effect on the virus. These preliminary results on saliva do not necessarily imply a lack of protection at the tissue level, especially in patients with a more severe form of the disease.

In conclusion, this work highlights the potent protective character of IgA. It raises the question of the possible role of secretory IgA in limiting virus transmission. It will therefore be interesting to evaluate to what extent the various vaccines that will soon be widely available could induce, or not, a systemic or even mucosal IgA response. If necessary, it could be envisaged to eventually include a local stimulation in our vaccine strategies, in the form of local nebulisations for example.

O. Silvie’s team has identified a Plasmodium protein that is essential for the infection of hepatocytes during malaria. This protein, called B9, could constitute a new vaccine target.

Microbiota and the immune system form a symbiosis. One cannot function optimally without the other. Antibody immune deficiency is a frequent disease for which there is no replacement therapy to compensate for the lack of antibodies in the intestine. Yet, these antibodies are important in regulating our microbiota. We will further characterize the abnormalities of the microbiota in antibody deficiency. We will focus not only on bacteria but also on other microbes such as viruses and fungi that inhabit our intestines and that are associated with a deterioration in the state of health of patients, due often to fatal hepatic complications. At the same time, using an original model of humanized mice reproducing the secretory antibody deficiency, we will test new supplementation of oral drug antibodies aimed at restoring microbiota balance. Such preparations would also find applications in all situations of imbalance between microbiota and immunity.